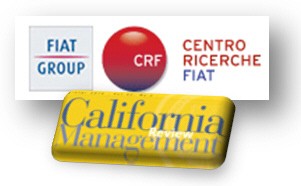 In a recent contribution on Harvard Business Review, Henry Chesbrough argues that the ideas behind Open Innovation are “recession-proof”. We support Hank’s ideas, bringing back from the 1990s the application of Open Innovation in the Centro Ricerche FIAT.

Our article titled “FIAT Open Innovation in a Downturn” features a review of the reforms that started to take place in Orbassano in 1992. Ideas that can be easily traced back to Hank’s Open Innovation paradigm were applied by CRF’s management with great success.

We decided to work on this paper almost one year ago, as many started to write and comment on the latest success of FIAT and the superiority of its technology.. starting with well.. President Obama:

“Fiat has demonstrated that it can build the clean, fuel-efficient cars that are the future of the industry” President Barack Obama: Washington DC, April 30th 2009

CRF’s technologies featured also on the cover of the Italian edition of the Magazine Wired, which emphasized the role of:

“The knights that were able to save FIAT and to buy America with three patents, while dreaming an engine with (almost) zero emissions”
Riccardo Luna, Wired Magazine, January 2010

Our contribution offers scholars a documented analysis on how Open Innovation was applied and worked out during a deep downturn: we studied and commented for our readers very interesting details of CRF’s strategy during the 90s. Also, we think that our work can offer a contribution to explain the success of a turnaround orchestrated by CEO Marchionne in more recent times, whose philosophy was summarized in another article on HBR:

“Being a leader at FIAT is a lifestyle decision. It’s not the Buena Vista Social Club! Most of the management meetings are held on weekends..”
Sergio Marchionne, “Fiat’s extreme makeover” Harvard Business Review ,
December 2008

Andrea, Federico and I are in debt to Gian Carlo Michellone, Paolo Dondo, Sergio Imperiale, Massimo Casali and Nevio Di Giusto for their priceless help and patience in walking us behind the scenes of CRF. Special thanks go to Henry Chesbrough, Vittorio Chiesa, Fabrizio Cesaroni, Stephen Cohen, and Alexander Stern for their comments on earlier versions of the article. And obviously.. the authors are grateful to two anonymous CMR reviewers for their insightful suggestions.