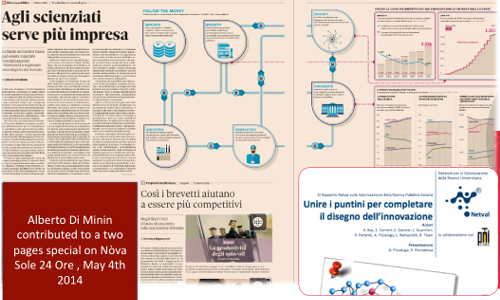 Italian public universities should emphasize the need to accompany researchers to the market, rather than to focus on the interfaces to transfer technology, through patents and licensing.

This is the key message of the special on technology transfer, that was published by Sole 24 Ore Nòva, on Sunday May the 4th. I had quite some good time showing the data compiled and analyzed by NetVal to international experts and friends. I will publish the complete interviews (in Italian… but Google Translate makes a good job…) on my #Fuoriclasse blog for Nòva. The first interview (already online) is with Henry Chesbrough.

Luca Tremolada, one of the most experienced editors for Nòva supervised the special. Thank you Luca for helping me to understand the rules of journalism!

Andrea Piccaluga, President of NetVal, which has monitored for the last 10 years the status of technology transfer in Italy told us that “the level of awareness of universities about their third mission of valorization has significantly risen in the last ten years”, and indeed the numbers show us exactly this. Even though Italian innovation and technology transfer system is quite far from EU averages, still “some managers of tech transf offices, as well as a growing group of professors, are indeed trying to accompany, as you suggest, the work of researchers, and we are observing the emergence of an increasing number of courses that train doctoral students in Science and Technology to what it takes to become and entrepreneur”.