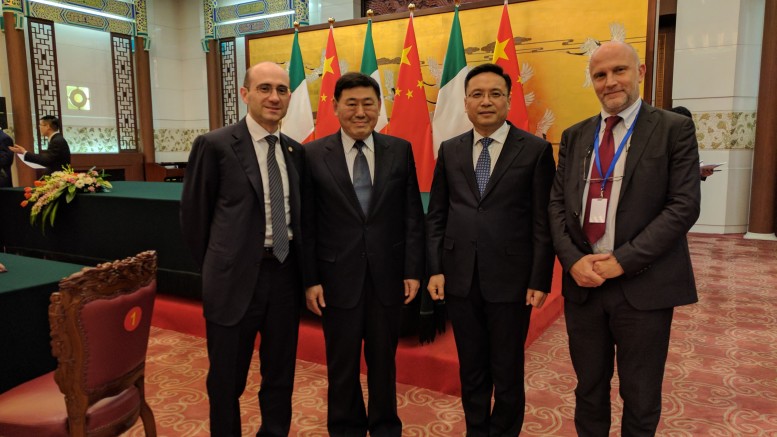 Alberto Di Minin, in the Great Hall of people, minutes before the signature in front of President Mattarella and President Xi Jinping. Next to Alberto, from left to right, the other three signatories: the President of Chongqing University, Professor ZHOU Xuhong, Dr.MU Huaping, Vice Mayor of Chongqing, Prof Pierdomenico Perata, Rector of Scuola Superiore Sant'Anna.

Alberto as Director of the Galileo Galilei Italian Institute in Chongqing signed together with the Rectors of Sant’Anna and Chongqing University and the Vice Mayor of Chongqing an important agreement for the development of a new Sino-Italian Reseach and Innovation Park in the Bishan District. This project will be conducted under the guidance of Scuola Sant’Anna.

The Italian mission represented “an important opportunity to strengthen bilateral relations in the fields of University, Science, Innovation and Space,” said the Italian Minister of Education, University and Research, Valeria Fedeli. Also, it could not have come at a better time for our two countries, which have intensified cooperation in five priority fields, including energy conservation and environment protection, agriculture, sustainable urbanization, health care, aviation and aerospace. With the words of the Ambassador in Beijing, Ettore Sequi, the China-Italy comprehensive strategic partnership has become “increasingly ambitious and increasingly concrete” in recent times.

The Italian President called for deeper bilateral cooperation: the next steps are to align China’s “One Belt One Road” initiative with Italian national development strategies, to integrate “Made in China 2025” with Italy’s “Industry 4.0,” and connect China’s “Internet plus” strategy with Italy’s technological innovation plan. Also, regarding the “21st Century Maritime Silk Road,” Italy boasts plenty of basics facilities and rich experiences in port operations and logistics, which enable Italy to play an important role in the project, in so doing promoting global economics, trade and cultural cooperation.

President Mattarella lead a business delegation attending the 4th Italy-China Business Forum, co-chaired by Tian Guoli, chairman of Bank of China, and Marco Tronchetti Provera, Executive Vice Chairman and CEO of Pirelli with focus on agro-industry, aviation/aerospace, environment/energy and medical/pharmaceutical. After the meetings in Beijing, the Italian President was received by the newly-elected Mayor of Shanghai, Ying Yong, and welcomed for a lectio magistralis at Fudan University, before going to Chongqing, and finally travelling to Xian to see the terracotta army.

If the future of a country is based on knowledge, creativity and education, China and Italy should also strengthen their cooperation in Research and Development, including exchanges of academics and students. The productivity and the quality of Italian researchers is high and highly competitive, and university could be key in boosting Italy’s development.

Against this background, a strong positive sign comes from the cooperation agreement signed in Beijing at the presence of the two Presidents between Sant’Anna School of Advanced Studies, Chongqing University, and Bishan District – the latter being a National High Tech Zone in the Municipality of Chongqing. A start-up incubator and a variety of educational and research joint activities, including master and doctoral programmes jointly established between Chinese and Italian universities: this is the core of the agreement signed on February 22nd. The goal of the two-year pilot project is to establish an open innovation ecosystem in Chongqing, attracting Italian and Chinese talents towards local economic development and named “Sino-Italian Research and Innovation Area”: a new bridge connecting Italian and Chinese science and technology. The Chinese local government is funding the pilot phase of the project, and relies on the ten-year presence of Sant’Anna School in Chongqing, offering an opportunity to those Italian universities, research centres and institutions which want to develop scientific cooperation with China in a safe environment.