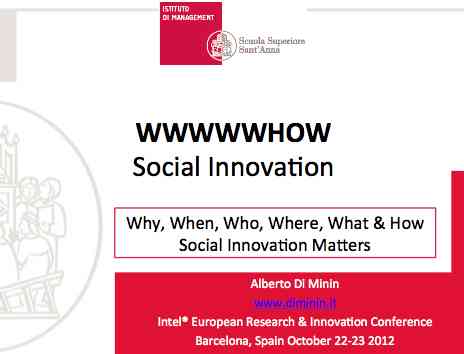 I really love Barcelona! it is just a fun city. Very lively and so many things to do around here.
I had the opportunity to be in town for the Intel European Research & Innovation Conference. This is the annual conference of the network of Intel Labs in Europe. The CTO of the company, Justin Rattner, joined the conference to celebrate the 10th anniversary of the Barcelona Lab.
I addressed the audience with a presentation titled WWWWWHOW Social Innovation: Why, When, Who, Where, What & How Social Innovation Matters.
I blended together the concepts of Open Innovation and Social Innovation: Open Social Innovation… discussing the cases of Ashoka and Emergency. take a look at my presentation and let me know what you think…

Having gone with Alberto to Barcellona I would like to share this my experience, telling something about what make this 2 days so interesting.

I had a very good time taking part to the Sci-preneurship event organized by YA-YE. I admit I was quite nervous, because just before the beginning it was told us that the students we were going to mentor were like the crème de la crème in Europe! I really do like being a mentor, and I partecipate to workshop whenever I have the occasion, but I didn’t really come up with somethig so challenging, so it was very stimulating also for me, not only for the students.

First thing that impressed me was the incredible will of the students. Volunteers like me were told that they had only 24 hours to work on their project, and we would have met them after just an hour and an half of efforts, so their projects vould have been at a very early stage. I said i was impressed because a good portion of the groups did already choose a precise idea to bring on, and those who hadn’t done it yet were thinking in very professional and deep ways, trying to find somehow “real problems”, in cities to make them smart.

Maybe they were “just students”, so very used to listen, more than to put objections (that is quite normal in business world), but I had the feeling that they were really listening what I was saying them (my competence area in this workshop was concentrated on the importance of the design in creating innovation, which is also my primary field of interest), and they were trying to find real and very practical ways to make treasure of it, and put it in their work.

After the first 24 hours for working they had to pitch their ideas. I’m very glad that i had mentored all the three teams that passed the first selection going to the finals. Their ideas were very challenging: first one was the creation af a platform to reduce the need of take car for buying things (a sort of buying carpooling). The second was the one i liked the most, a system to make kids play while recycling, to be built in parks and playgrounds, whose outcome is a high fertile soil that can be used to grow plants and give not only an immediate “gain” but also something to care in time. Third one was a very smart system to reduce the hospital and health need for medicine, thus incentivating lesser waste, and better life conditions.

There were many other moments that I liked very much in this two days, like the dinner in a very special place, or the opportunity to see from not so far the CTO of Intel, which is somthing like a mythical creature to me, but the moment I will really bring on with me will be the one spent till late night talking with the Sci-preneurship guys.