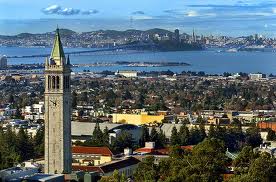 10 years have gone by since my first time in Berkeley. As a PhD Student at BRIE/City and Regional Planning/Haas it was an incredible experience. After my graduation, I found many excuses to be back in  San Francisco and Berkeley, but now, 10 years after my first time in town, I find it somehow different.

Back in 2002, I arrived in Berkeley charged and motivated, with plenty of good advices from friends and mentors: what to do, what to avoid. Even though the excitement was super-high, I just had no idea of the incredible people I would have met, the unforgettable experiences, and the remarkable intellectual journey I was going to enbark upon.  Berkeley is a unique place on earth. Its campus probably the single best location for a graduate student…
Fall 2002 was also my first semester at I-House Berkeley. Tons of memory also there!

When I arrived, tuition was less than half of what is today, and faculty salaries were higher… As students we experienced  the financial crisis in the State of California, a Recall and a Governator, the impact of the war in Iraq, two presidential elections…. and Italy FIFA World Champion in 2006. But we were observing the world from “a Berkeley perspective”. It was strange, and gave me the distance to probably see things differently. I believe this is still something I carry on with me.

Berkeley has defined in a unique way the scholar and the person I am today, and going back is like a walk back memory lane.