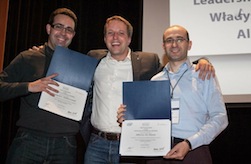 I am wrapping up this great trip to San Francisco/Berkeley.

Not only work, but also pleasure and I was able to greet some old and new friends.

The finals of the Intel Business Challenge were terrific, even if a bit of a disappointment for the European start-ups, which simply didn’t make it to the podium, they had to face remarkable competition from India, Colombia, US, China… what an incredible evidence to my friend Hank Chesbrough, that yes indeed innovation can start-off from anywhere (..but most of the times ends up here in the Valley), and that your company needs to remain open and absorptive to good ideas that are out there. In the picture above,  BioSyntia, one of  the teams from DTU (Denmark) presents in front of a large audience during the awards ceremony at the Haas School of Business, U.C. Berkeley. BioSyntia was the only European company which made it to the final 10s, and I would really like to congratulate my friends for such a remarkable achievement. Take a look at their pitch.

During a dinner at the Berkeley City Club,  I received a recognition for my work as Country Associate for Italy that I definitely have to share with all the people that helped me with this at Scuola Sant’Anna (Claudia Daniele, in particular!).

10 years after my unbelievable, unrepeatable, ultra-sonic arrival in Berkeley, I could not help but passing by to say hi to the people at IHouse. This remarkable institution, 80 years and counting, is still a point of reference for the international community on Campus. I checked if the brick I placed on the patio of  the Ihouse Café was still there… (yes, see picture…)

I had the opportunity to meet with the new Executive Director Hans Giesecke (who shares with me a passion for the UWC movement!!), here is Hans in his office, which has been in the past the setting of  many “lively discussions”between me and Hans’ predecessor  Honorary Italian Citizen Mr. Joe Lurie.. who retired back in 2008.

…and speaking of Italians in the Bay Area: Italy is now represented by Consul General Mauro Battocchi, who I met in India, quite a few years ago, during an interesting (and stomach-devastating) trip.  Mauro is happily set in his new office on Webster @ Washington and in my opinion he will be a great resource for the Italian Community. Here is Mauro with his brand new Fiat 500 (manual but with “hills control” quite useful in San Francisco). I don’t know if you can read, as the picture I took is rather small, but the tag reads -CONSUL- . Mauro is quite the ambassador of Made in Italy right?

I will be leaving tomorrow morning, hoping to be back soon,  but hopefully with time with Roby and Lucia!!