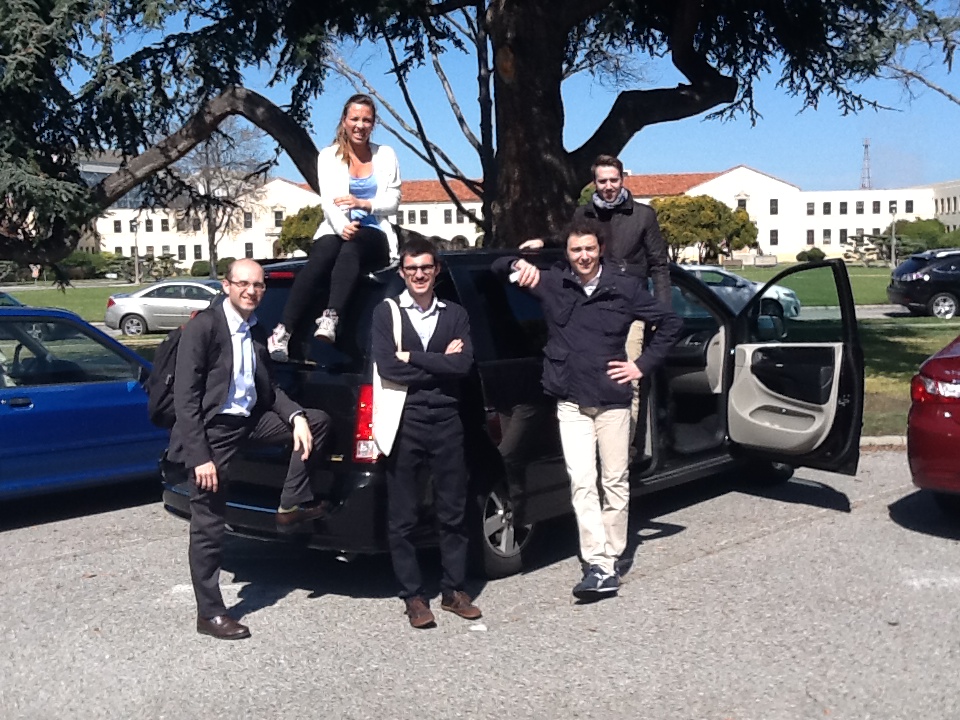 Earlier in March, Simone Corsi and I  accompanied a group of entrepreneurs from Confindustria Toscana Giovani, in a study tour around the San Francisco Bay Area. We organized this tour to complete the in-class executive training program titled Change Agents that was coordinated last year by the Istituto di Management. During an intense (very intense) week, we had the opportunity to get to know what’s going on in San Francisco and Silicon Valley: where people and companies consider the current downturn something which belongs to the past, and are running very fast towards years of incredible expansion.
Here is a detailed account of our adventure.

Monday March 11th: Early start for our Confindustria group! We took BART from the Civic Center at 7.15am, and we were greeted by Jeff Burton, Executive Director of Skydeck just off the U.C. Berkeley campus. The mission of Skydeck,  the newest incubator in Berkeley  wants to become  THE point of reference for future entrepreneurs from U.C.B.. There are a lot of incubators in the Bay Area, but Skydeck is a community of Berkeley entrepreneurs, strategically located and established through the partnership of the School of Engineering and the Haas Business School.

Anno & Henry after their talk

On we went with Henry Chesbrough, from the Haas School of Business. With his signature-style, Henry introduced the group to the key concepts of Open Innovation. (Every time Henry is giving a talk  I feel I am at a concert of my favorite rockstar). One of my mentors at U.C. Berkeley, AnnaLee Saxenian gave us her interpretation of Silicon Valley. Why is this place so special? The view of a very special ecosystem from the perspective of Miss Silicon Valley: “relationship and trust in the valley is based on professional relationships and competences… not family ties or greasy handshakes”. There is no recipe to build a Silicon Valley, and Saexenian’s message is “don’t try to imitate Silicon Valley, but connect to Silicon Valley!”

We close the visit with a stop at Citris, one of the main technology hub of the Berkeley Campus. Finally in the evening, back in San SanFrancisco we were welcomed by the BAIA community, the most lively Italian professional association in the Bay: pizza and drinks for a night out among old and new friends, exchanging contact information and insights on how business is going in Italy and in San Francisco.

Tuesday March 12th. Our first day in Silicon Valley. First stop Linked In. We are greeted by Giovanni Iacchello. Giovanni worked in McKinsey, after completing his PhD from Georgia Tech, and before joining Linked in. We were presented with the strategic guidelines and the main features of corporate culture of a compay that went from zero to 3000 employees in little more than 10 years. “One of the main problems for enterprises around here is to look for good engineers.. and to retain them!”.

After this first taste of Silicon Valley, on we moved to Singularity University, a quite peculiar place. An academic institution situated next to the  NASA Research Lab (on federal territory), supported by the Silicon Valley community, and based on the idea that professionals from all walks of life need to be “rewired” to function in a world which is more and more under the spell of technologies that are changing our lives at an exponential rather than incremental rate.

In front of Singularity

After a relaxing break under the sun in downtown Mountain View, our delegation joined the Italian Innovation Day, celebrating the contribution of Italian hightech entrepreneurship, powered by Marco Marinucci‘s Mind the Bridge. Our Consul General in San Francisco Mauro Battocchi opened by quoting Schumpeter.. and the concept of creative destruction. (Now: do you know of any other Italian Consuls that would start their remarks citing an Austrian Economist..? Let me know, because I don’t.)

In a remarkable keynote, Federico Faggin suggested that Italian engineers are able (much better than others) to blend artistic creativity and technological know-how. Around them they don’t have the ecosystem to develop their ideas… and therefore they look for opportunities somewhere else. Italians who leave Italy and apply their talent here in the US are very important for the global innovation system.  Is this phenomenon an alarming sign for Italy?  Maybe, “But the world is a better place  thanks to the creativity and the hard work of Italian talents, wherever they deploy their creativity”. I could not agree more with Mr.Faggin.

We ended the day at Chiara Giovenzana‘s house, a beautiful mansion situated somewhere outside Mountain View. Chiara took care of our Italian appetite with great food, and at the same time we had the opportunity to chat about business & politics with her housemates and guests.

Wednesday March 13th.
The City of San Francisco should focus on providing infrastructures, clean air, public transportation and all those services to encourage entrepreneurs and talent from all over the world to relocate in the city.
“We pay for the privilege to live here” claimed Mark Chandler, Director of International Trade and Commerce for the Mayor’s office. On his way out to Ireland, Mr. Chandler explained to the Confindustria delegation how his city was surfing through a new wave of innovation and entrepreneurship.

At Wilson Sonsini Goodrich & Rosati,
our group was greeted by Mario Rosati and Console Mauro Battocchi. I think I was a bit nervous when I presented my group in front of a very selected audience, in one of the key legal firms of the Silicon Valley.
Giacomo Cancelli of Viditrust, Guido Chiti of IPAC, Andrea Margini of Caem and David Zolesi of Kayser did a great job  introducing their companies and products.
We left the audience with the feeling that there is a lot of potential and entrepreneurship in Tuscany.

Thursday March 14th. Another day, another early start. Even as a U.C. Berkeley Alumnus, I have to admit: at the center of Silicon Valley is Stanford University. At the center of Stanford we find Design Innovation.Paul Marca, Exec Director of the Stanford Center for Professional Development introduced us with his remarks, insisting on the concept that  “failure sucks but it instructs”, and therefore our companies should be wired around the concept of failure as part of business life. Paul organized a terrific tour of campus, with a stop at the Hasso Plattner Institute of Design. Probably one of the best places in the world for a mechanical engineer. We were introduced to the spirit of these incredible facilities by Prof. Mark Schar, and he was able to provide us his understanding on Design Innovation.
On my way back I bought the book Make Space and hopefully I will try to implement some of the ideas Mark presented us also in my office. We were also lectured by Prof. Tom Byers from the Stanford Technology Ventures Program.  Tom was still very touched by his memories of a recent sabbatical to Florence, and he shares with us some of his ideas: “As you are running your company you are writing your epic story. The key question you need to pose yourself is What’s your story?”. Tom’s presentation was pure energy, and walked us through a new vision of strategy.

After a light lunch on the Stanford campus the study tour proceeds to Google, where Stefano Menti and Andrea Siciliano showed us around and provide us with a snapshot of Google’s corporate culture: “Google paved the way for what has become common practice now for so many start-ups. We work in an environment where it is fun to come to the office every morning, and the company provides you with anything you might need to be productive”. This is my first time in Google since 2005 or so… I was disoriented by the growth of the infrastructures of the company in Mountain View.

We then closed another very full day at Plug & Play, one of the first incubators in Silicon Valley. Companies like Google, Paypal, Logitech were located here at a certain point during their life. Jupe Tan described to us the international outreach activities of its company “a Silicon Valley in a box”.

Friday the 15th was our final day of visit, and we decided to change rithem: from semiconductors to wine! We met with Jim Lapsley, Professor at U.C. Davis, who introduced us to the history of Napa Valley. Quite an extraordinary journey, through technology, marketing and indeed wine. Napa is an incredible place and the numbers Jim showed us proved its centrality for the U.S. wine industry. After a tour and lunch at the  Culinary Institute of America, Prof Martin Kenney gave us his interpretation on what we observed in the last week. Martin’s first slide was showing a surfer, fiercely controlling the strength of an enormous wave. The Bay Area is the result of the work of entrepreneurs who seized their opportunities and so doing paved the way to the generations to come. I think we will take home with us this image!  But before heading back to the City, we stopped for some wine tasting at the Viader Winery, enjoying a beautiful view over Napa.

A final note: to thank Simone Corsi for helping me with the organization of this trip. Paolo Chiantini and G.Giacomo Gellini were two excellent team leaders (and in the case of Giacomo I would add also a great driver!). This tour would have not been possible without the combined effort of these three persons. I am grateful to the many Italians we met in the Bay: starting with Mauro Battocchi, our new Consul General, who had been just incredible in helping me with the organization of this trip, and Stefano Mancini, for his coordination work and great contacts.  Thanks to Stefano Menti and Andrea Siciliano for their insiders’ view on Google as well as to Giovanni Iacchello, for kick-starting the week with a nice visit in LinkedIn. Indeed, thanks to Marco Marinucci for hosting out team at the Italian Innovation Day, and to Richard Boly (Italian ad honorem), for chairing the panel with GGG.  And also thanks to  Chiara Giovenzana, Matteo Fabiano, Matteo Daste and to all the friends of BAIA for their kind hospitality. The speakers we had the opportunity to meet were very professional and delivered presentations which in certain cases went indeed beyond our expectations. Jeff Burton was a great host at U.C. Berkeley,  Hank Chesbrough and AnnaLee Saxenian clearly helped us putting things into perspective. Paul Marca, Tom Byers and Mark Schar organized a great visit to Stanford University. Jupe Tan was a fantastic host at Plug&Play. Finally, James Lapsley & Martin Kenney gave two remarkable keynotes during our friday in Napa. Thanks to Ted Egan and Mark Chandler for organizing the visit to City Hall.
Thanks to Mario Rosati and the team at WSGR for their great hospitality, and for the opportunity to present our team in such a prestigious location. We also enjoyed very much the time spent in the garden with Risto and Juulia at Idean, at the Oakville Experimental Vineyard, and with the wines of Delia Viader.

Last but not least:  Dear Simone B., Giacomo C, Paolo, Guido, Luca, Gabriele, Mr. President, Giacomo L, Andrea, Giacomo M., Maria, Massimiliano, Franco and David thanks for taking the time out of your companies and for joining me in this little adventure. Thanks for putting up with my bad moods in the morning and for showing up no later than half an hour late. Thanks for the enthusiasm, the group spirit, the fun!  We have to do this again soon.