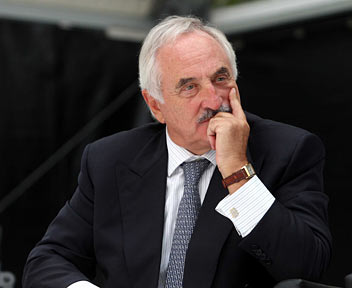 Alberto Di Minin (A.D.M.) It was 1962 and a young Alberto Bombassei moved his first steps into an innovative start-up named Brembo. How was creating a start-up in those days?

Alberto Bombassei (A.B.) The whole firm started as a family company, as many start-ups did in that period. We started our business with 5 employees and the setting of a generic mechanical company that was very curious to see what was happening in the market and was ready to catch any available opportunity. In 1965, disc brakes were introduced in the automobile’s market, flanking the traditional drum brakes while offering significantly better performances. The first Italian car manufacturer that adopted such an innovation was Alfa Romeo, buying brakes from England. Alfa Romeo asked if we were able to replicate such innovative products, that in those years were seen as science fictional stuff. As Italians often do, we answered “yes”, with a little of positive recklessness. For us it was something totally new to be produced.

We started up with the name “Brembo”… adopting the name of the river flowing through the province of Bergamo. This simple choice proved to be the right one: it was a short word, easy to remember, and the translation of the word brake into Deutch was Bremse. We never changed our brand name later on. Now with 7.300 employees and 18 plants in 15 countries, we are market leaders in the disk brakes premium segment.

It has been our technical and technological curiosity, since the very early days that guided us till today.  We are ambitiously seeking excellence and innovation. That’s why we are the leading innovator in our market, creating new products with the best available performance. Our religion was then and is now  “innovation”. We have always invested more than the industry-average in R&D, and I believe this is the reason why we are still here today.

A.D.M. What happened to that little mechanical workshop? How could Brembo jump on the right wave? I recall something about an accident with a truck…

A.B. That is part of the folklore of our company: the story says that this truck, while carrying disk brakes from England to Italy, had suddenly a serious accident; all the brakes needed to be checked again before the assembly, and we were appointed to do this activity on-site. While looking at those brakes, we started to see these science fictional products in a more realistic way, convincing ourselves that we were able to replicate them in Italy. And we asked Alfa Romeo to give us a try. They accepted the challenge and we started to supply those disc brakes. We started in a proper way, learning well and quickly and constantly looking at new ways to improve our products. This allowed us in a few years to knock at Ferrari’s door.

A.D.M. Can you tell us about your first meeting with Enzo Ferrari?

A.B. In those days we were the only suppliers of the only car maker who was adopting disc brakes for the consumer market and we decided to enter the racing market, where disc brakes were started to spread. So we decided to approach Enzo Ferrari. Mr. Ferrari, who was a self made man, looked at us and saw a young men that was starting a company from a small workshop. He said “ok, let’s give them a try” and we started our partnership with Ferrari, proposing innovative solutions. Maybe it was in that moment that we gained momentum, transferring many innovations from F1 to the general market. In the next years we started knocking at all F1 team doors, and in a few years we became the official suppliers of 100% of the F1 teams. We bought our English competitor and nowadays we have two R&D teams competing freely in the innovation race. As time passed by, we witnessed many innovations: among them there was the adoption of carbon material. Since there weren’t carbon producers in Europe, we had to deal with the American Aeronautic Industry in order to have the raw materials before we could start to make it ourselves. Nowadays we have a group of four Engineers coming from Politecnico di Milano that are our suppliers and are helping a lot with this new technology that allow us to reduce the weight of brakes of 2/3.

A.D.M. What did Brembo learn from F1?

A.B. Let me point out a few aspects: research and innovation has been a leitmotiv for us, since the beginning. It is true that competitions helped us to accelerate by offering our companies new possibilities. For engineers, is there anything better than designing something without cost constraints? I think it is the dream of all of the engineers, instead of being told to build performing products with a limited amount of resources. In the heyday of F1, performing products could cost whatever amount of money, so the engineering teams had wonderful times and we could experiment a lot and learn new things. The other challenge for them was to transform performing but expensive products in good but less performing ones to target the consumer market.

A.D.M. Is it true that a brake needs to be performing but also beautiful?

A.B. While we were trying to gain market share, we insisted on two streams of innovation. The first was the introduction the first aluminium calipers, replacing cast iron. The second was the Italian touch: I believe the amount of money you have to spend to design something ugly is the same amount you spend designing something beautiful you spend the same amount of money if you design something designing something ugly nowadays it often has the same cost to design something that is beautiful and something that is ugly; we might do it in beautiful way. And car manufacturers started gradually to let the brakes come out of the wheels, acknowledging our effort in making good-looking products. We managed to have many imitations from the eastern countries, with plastic caps that look like the yellow Porsche brakes that are used on top of the ordinary calipers. I think that design is one of our competitive advantages nowadays, we have it in our DNA and we are able to express it even in unrefined products like brakes. This is wbat makes the difference between a good product and a Brembo one.

A.D.M. I have the feeling I am talking to an entrepreneur who is behaving like a researcher, a bloodhound who can sense  opportunity and gain competitive advantage. At the same time, if I look at the history of Brembo I can see a lot of collaboration with external partners. Brakes are part of a complex system, an element of a platform.

A.B. Talking about sensing opportunities: take a look at my nose… it is a little bit twisted, and this is the result of the many doors closed on our face by Fiat managers. We had to look elsewhere. And we were able to find a lot of qualified partners outside Italy. Among them Porsche, maybe the leading car manufacturer from a technological point of view; they decided to adopt our brakes and this collaboration was crucial for Brembo’s innovation trajectory, because in Porsche we could find all the technologies that have been developed in the car industry. We had a similar DNA and we could easily align our business models: it was a very fruitful relationship! Nowadays the R&D scenario is changing very quickly. This is a global market and our entrepreneurs aren’t getting this completely. Entrepreneurs need to change their mind-set. Universities need to change too, because new competences have to be built, including foreign languages. I believe new geographies will emerge, and production of physical goods is moving back to United States.

A.D.M. Will be there a future for Italy in the manufacturing sector?

A.B. Unemployment in Italy has  reached 12%, 40% among young people. We need new ways to generate workplaces. Can we do this the old way? Can we rely on traditional Made in Italy productions? No, we cannot! We need to invest on innovative products, we need to invest in knowledge, research centers. This needs to be a systemic transition, not something limited to individual firms’ initiatives.

A.D.M. Professor Enrico Moretti from the University of California, Berkeley talks a lot about territories, places where high tech products can open up new avenues for successful business. Ten years ago, Brembo opened Kilometro Rosso. Why this initiative? How the relationship with the territory has been evolving over the years?

A.B. We need to innovate our products, in many sectors and in many new ways. We created this big R&D lab which today employs 600 engineers. If it worked for us, we thought that this could be an opportunity also for other companies. Some companies joined our vision, and we created a knowledge center that includes university labs and several research centers like Mario Negri and Italcementi group. Nowadays we have more than 40 companies working in Kilometro Rosso and some of them started working together on research projects. Synergies have been created among start-ups, SMEs and Brembo.

A.D.M. It is quite a challenge to bridge the differences between small, and large companies like Brembo, isn’t it?

A.B. It’s true, but this is not impossible. We have many successful stories of hybridization in Kilometro Rosso. From our perspective we are proud to start something new in our territory. Still, we are a bit disappointed that the interest for this project in the province of Bergamo was very low. The world outside the red walls of Kilometro Rosso seems to be very far and different from the innovative reality inside.

A.D.M. China is quite present on Brembo’s radar. Brembo has moved part of its production to China and is looking with great interest to the Chinese market. What can you tell me about the risks and chances in Asia?

A.B. This is not an easy question. Before getting married in China we had a long engagement, because we were not so convinced. And we postponed the transfer of an R&D facility to China, since we were very frightened by local competition. Now it is absurd not to be there: in a few years China will be our main market. Nowadays our plants are producing brakes for European car manufacturers, and we will produce soon for local car makers. The world’s center of gravity is moving east, to China and India. I think it is mandatory to be there, in order to better get to know China and Chinese culture. We started by having Chinese experts visiting our factories in Italy. It is useful also from a cultural point of view, it is important to build linkages among universities for example, and it is relevant that so many students are travelling across the world thanks to exchange programs.

A.D.M. Enzo Ferrari kept on his desk the scale models of the most unsuccessful F1 cars. He said that he wanted to keep failures very close to him so that he could learn from them. Can you tell us about a mistake you could have avoided?

A.B. I may seem too pretentious, but I can say that I didn’t make any big mistake that I could have avoided. I have the habit to share, and to look for the best people to work with me. Other people thought that the entrepreneur was the strongman, I preferred to share any decision. This reduced a lot the likelihood of making mistakes. Of course at my age I may have forgotten some mistakes… To the students that are starting this  Master experience I suggest to learn how to work in teams. Teamwork is fundamental, Italians are great individuals but in many cases we are not able to work in team as well. Travel as much as you can! Have experiences abroad, discover the world! That is the best way to measure yourself and to grow as a person and as a professional.