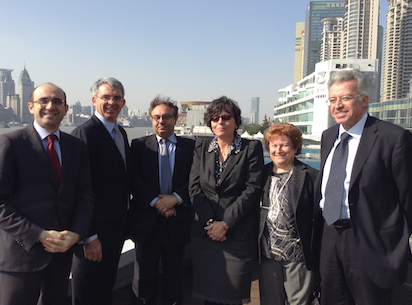 Just coming home from the official trip of Minister Maria Chiara Carrozza to China. This was the first time for a member of Letta’s cabinet to travel to China, and it was a visit long due.
The goal of this brief account is to pin down some of my personal memories and opinions about this journey. Why China?
NESTA UK recently published a report titled: China’s Absorptive State claiming that the best way to understand the most recent dynamics and to relate with a country whose growth trajectory had been uninterrupted since the 3rd Plenum of the 11th central committee of the Communist Party is to consider Cohen and Levinthal’s Absorptive Capacity theory.
The country as an enormous sponge, geared to attract, absorb, reinterpret and create new value from reinterpretations of the world’s best technologies and ideas. That study, together with the reports provided by our offices, was in my backpack on my flight to Beijing, and I found it a key document to make sense of the conversations we had with top governmental, party and university officials.

The strategic relevance of this country for Italian universities, research centers and companies is self evident. Italian institutions are active in China and Italian talent is appreciated in a variety of fields, from luxury and fine dining, to mechanical parts and biomedical devices. Still, members of the Italian government are a rare occurrence here in China, I have leant that Chancellor Angela Merkel travels various times a year to China, and that Italian direct investment in China, as well as Chinese investment in Italy are among the lowest among OCED countries. Minister Carrozza addressing a group of Italian entrepreneurs in Tianjin

Besides what numbers say, during this trip to Beijing, Tianjin and Shanghai, Minister Carrozza, Advisor Benedetti and myself met with a vibrant community of Italians, doing business, cultivating arts, studying and researching in this country. I was impressed by their enthusiasm and positive attitude towards their perspectives.

It was remarkably clear to me that my compatriots here are making the of what they have available, and they concentrate to exploit the opportunities presented by this endless Far East frontier. This interaction made me happy, motivated, and for a few days I did not have to hear about missed opportunities, fiascos of our national policies or economic strategies.

We did not discuss about wasted talent, lack of funding, and the conversations were projected towards new things to do, bridges to build, ideas to turn into reality. This spirit was extremely contagious: I think the entire delegation is taking home this sense of achievement.
Our Chinese friends hear and read what we tell them about the situation in Italy and they do not understand. “For Chinese it is not conceivable that Italy is going through an economic recession. The strength of Italian brands, the collective image of our country is extremely strong!” told me Prof Plinio Innocenzi, Scientific Advisor with the Embassy here in Beijing. The intangible value that surrounds anything which vaguely looks as Italian is immense, as Chinese have a high reputation of our culture, science, lifestyle.

Still, we did not come to China only to experience Chinese resolution and optimism. Minister Carrozza traveled to China also because this country is the single fastest growing scientific partner for Italy. A few numbers here to substantiate this claim are necessary.
According to a calculation kindly provided me by my colleague at La Sapienza, Prof Cinzia Daraio, last year over 1000 peer-reviewed international scientific papers were co-authored by both an Italian and a Chinese researcher. The number of joint publications had been steadily growing for the last 10 years, with a CAGR of 17% (!!). If we rank our international scientific partners, based on joint-publications, China  features at the 7th place. In the last few years the number of co-authorships with Chinese scholars have surpassed those with Japanese and Russians. This top-ten represents a very important ranking as in my mind it shows the main output of international scientific collaborations. Compared to other European countries these are still small numbers (UK scientists for example have 4K joint publications per year with Chinese colleagues, and in absolute terms we are surpassed by much smaller countries), but the growth rate is encouraging. While various Italian universities and research centers established autonomously collaborations with Chinese institutions, I think it was very important for top Chinese policy makers, university presidents, and scholars, to meet an Italian Minister with a strong scientific background, with years of experience running a research team and an academic institution: a politician whose language they were able to relate with. “The closer you are to the object of learning the higher the effectiveness of learning” this is the essence of Cohen and Levinthal’s absorptive capacity epistemology. I believe that meeting with Minister Carrozza decreased the sense of distance between Chinese and Italian research systems and this new fact can pave the wave for future collaborations.

What did we do during our visit?
On November 15, We started off in Beijing, where we took part to the 4th edition of the Sino-Italian Innovation Forum. Gianluigi Benedetti and myself worked with Città della Scienza and the Chinese Ministry for Science and Technology for months to improve on the format of this bilateral business meeting. Together with valuable help from my friend Mattia Corbetta (MISE), Valeria Fascione and Netval, we introduced and I chaired a track dedicated to young talents: start-ups and spin-off companies pitched in front of potential Chinese business partners.
My impression of this very first attempt was that China is indeed hungry for new ideas. The country has learnt the enabling power of science and technology applied to business and its incubators, technology parks and universities are seeking to become a global magnet for the development of new value. Taking note of the approach Chinese experts were reserving to Italian start-up companies was indeed my first validation of the “China as absorptive state” idea.
Minister Carrozza’s inaugural talk during the Innovation Forum emphasized the need of closer links between Italy and China based on scientific projects, the exchange of faculty and students. The Minister showed the numbers suggesting the growth of joint papers between China and Italy: “as a scientist I am very interested to the derivate and hence the trend of these numbers” she claimed overseeing the signature of nine collaboration agreements. Next year’s forum will be organized in Bergamo, and it was great ho have with us during these days Prof. Piera Molinelli (Provost in Bergamo) and Prof Sergio Baragetti, (Director of the University of Bergamo’s technology transfer center). We had the opportunity to get to know each other and to brainstorm about what to do next year.

The message that scientific collaboration should lay at the center of international relationships between China and Italy was emphasized during talks with the Chinese Minister of Science and Technology, Wan Gang and the President of the China National Space Administration (CNSA), Mai Xinrui, as well as in the course of meetings with the Ministry of Education, and the Chinese Academy of Sciences.
The reception at the Italian Institute of Culture in Beijing, was an opportunity to greet some of the people from the Embassy that helped to put together the program of the visit, and the small group from Sant’Anna: my post-doc student Simone Corsi, Professor Fabrizio Di Pasquale, some former Chinese PhD students and of course Mattia Bellomi, who recently moved to Beijing with his wife. I was very pleased to meet the representatives of the Chinese Italian Alumni Association in Beijing, whose mission is to connect scholars and students who worked and studied in Italy, as well as the Network of Italian Researchers in China. There are approximately 10.000 Chinese students present in Italy, and China is the 1st non European national group in our universities. At the same time 4000 Italians are currently studying in China, and hopefully these two numbers are destined to grow. Traditional Chinese music accompanies us, during one of the interludes organized by Maestro Alberto Veronesi.

A delightful surprise during the reception was the concert organized by Maestro Alberto Veronesi, featuring some of his young Chinese students with a passion for Bel Canto. I think that Alberto’s success in China is an example of how we can project our national cultural heritage towards global markets and distant countries. To understand the potential, just check the incredible success Chinese productions of classical Italian opera are having on the Beijing and Shanghai scene.
In the course of this trip we visited and met with the leadership of prestigious universities. First stop on Saturday the 16th was in Tianjin, where the Minister gave a lecture and received the title of Honorary Professor. In Tianjin, we also visited the new Creativity Park, a joint Italian and Chinese initiative, that will soon host hundreds of students in architecture and design, and it will be the site of the activities in China for a consortium of Italian universities.
We were hosted by the Italian community of Tianjin for a lunch at the former Italian Concession, which is still beautifully preserved and lively also thanks to the generosity of local donors. “You are a wonderful expression of Italian entrepreneurship!” emphasized the Minister during her remarks at the Nuovo Cinema Paradiso restaurant.
The Consul General Vincenzo De Luca was our superb host in Shanghai. During the reception organized at the Consular residence we met some of the scholars and managers working in the city. During our brief stay, we visited Huawei, exploring their R&D labs and experiencing their virtual presence solutions. We were guided through the 100K squared meters site of the Shanghai Science and Technology museum by ist Director and his assistants. He was very proud to showcase some of the exhibitions ranging from Leonardo to robotics, whose goal was to make technology cool and attractive for the younger ones. Of course we had to pay a visit to the Italian pavilion of the Shanghai Expo, now a museum featuring exhibitions dedicated to Italian design, creativity, industry. Our visit in Shanghai ended on Monday the 18th with the Jiaotong and the Tongji University. Also in Tongji the Minister gave a lecture titled “Human-Robots symbiosis” to inaugurate her position as honorary professor. During lunch Prof Zhiqiang Wu, Chief planner of the EXPO 2010, and VP of Tongji University, shared with us some views about how the city has changed and keeps changing. Still today it is impossible to look out of the window without noticing at least a crane.

We enjoyed the sunset observing the view from the headquarters of the China-Italy Design and Innovation Center (CIDIC), where the Minister gave a talk concluding the meeting of the Advisory Board: “More collaboration between China and Italy needs to be based on the work of good researchers, scientists and engineers, on joint work between our universities and industries”.

These were the last stops of an intense trip. Final group picture in front of the minimalistic monument dedicated to Guglielmo Marconi at Jaotong university. We were greeted by a delegation of Italian students enrolled here.